Thank you for your patience while we retrieve your images.

Shanna and Daniel got married at their property in Hoshton, Ga in May of 2017. I love wedding ceremonies that take place at a location that means something to the bride and groom (and a wedding at home would certainly make for a more personal wedding). Shanna got ready in the house, while the groom and groomsmen finished up the final touches for the ceremony site. The wedding and reception was actually held in the hay field next to Shanna and Daniel's house. Daniel actually cut pathways in the field to lead people from the parking area to the ceremony and reception. I went across the street to meet up with the guys after they finished their chores and worked on a couple of photos of them over there. I would later come back to work with Shanna and the bridesmaids once everyone was dressed. A shot of Fireball got the official bridesmaids photos underway. The bridesmaids were a ton of fun and we were able to get the photos that we needed to get prior to the start of the ceremony. I could see that we probably wouldn't have a lot of time for photos after the ceremony due to the dark clouds that were forming in the sky.

You could see Daniel's face light up as soon as he saw Shanna walking down the aisle with her dad. The two of them were so sweet during the ceremony and before you knew it, they were officially married! We quickly transitioned to family photos as the rain slowly started. I finished up with a magical photo of Shanna and Daniel alone in the rain prior to the start of the reception (and the first dances). Each dance seemed to be more emotional than the last and nearly everyone was fighting back tears by the time toasts started. With the weather being somewhat uncertain, they decided to go directly to the cake during a lull in the rain. Afterwards the dance floor opened and the weather couldn't stop the crowd from dancing the night away. The bouquet and garter toss signified that the night was coming to an end everyone lined up for the sparkler exit. Shanna and Daniel shared one last kiss for the crowd before exiting back to their home.


6 Hours Coverage at a private residence in Hoschton, GA 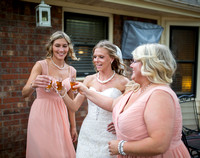